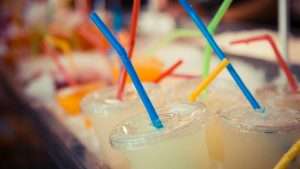 When it comes to tackling plastic pollution, the UK government says it all! With a proposal to ban plastic straws, cotton buds, and drink stirrers, the campaign to cut single-use plastic wastes is about to get real! The uproar was caused by the UK prime minister herself, and the movement is spreading like wildfire across the British borders. Isn’t that amazing? Go UK! We at ibanplastic.com will show you all the love and support!

“Plastic waste is one of the greatest environmental challenges facing the world, which is why protecting the marine environment is central to our agenda at the Commonwealth Heads of Government Meeting.“

An astounding 8.3 billion metric tons of plastic wastes are produced since the 1950s. Take note that with only less than 9% being recycled, and 12.5% incinerated, 6.3 billion metric tons still stay on the planet as harmful wastes. Thank God the authorities finally noticed the severity of the plastic problem!

The proposal was announced during the meeting of Commonwealth Heads of Government at Buckingham Palace, London. May encouraged the other 52 state leaders to follow the UK’s lead in an attempt to reduce plastic wastes. She further asked the organization to join them in fighting against marine plastic pollution through funding global research and improve the world’s waste management, especially in developing countries.

UK’s War Against Plastic: the Facts and Figures

With over 43 billion plastic straws, 13.2 billion cotton buds, and 44.1 billion plastic stirrers being used in the UK every year, we all have to agree that it’s about time for its government to do something about it. The government is hoping to “eliminate all avoidable plastic wastes” for the next 25 years. With the government’s power, imagine if all the countries will ban single-use plastics? That kind of happiness will make us sing “a whole new woooooorld, a new fantastic point of view!” Oh C’mon! It doesn’t matter if you’re out of tune, it’s the thought that counts, right?

Kidding aside, this is not the first time that the UK waged war against plastic pollution. Queen Elizabeth II already command the prohibition of disposable plastics in the royal estates earlier this year. In addition, a rapidly growing number of restaurants are ditching plastic straws and use glass, paper, or metal straws instead. Not only that, Scotland is plotting a total ban of plastic straws throughout their country, and they’re very serious to do it this year. The number of companies banning plastic straws is also increasing in a global perspective. Last January, the government officially cut ties to microbeads by banning it in face wash, toothpaste, and other cleaning products. In the same month, Iceland, a leading UK supermarket, has made it into the headlines after announcing its plan to eliminate any plastic packaging under their brand.

How to Break Up with Plastic, the BBC way

Let me share you a hilarious, but informative video that starts with the question, “Stuck in a relationship with plastic?” The BBC news suggests five ways to break up from your long-term relationship with plastics. It includes using a wooden toothbrush with bristles from pig’s hair (trust me, it works), toothpaste in a jar with a bamboo spatula (weird taste but worth it), silk dental floss (instead of plastic ones), using your mouth to drink (dude, stop being lazy and ditch the straws!), fabric food wraps covered in bees wax (it’s also reusable), biodegradable tea bags (because most have fine plastic mesh), and take-away lunch boxes made up of 100% bamboo (biodegradable all the way!). Sorry plastic, but it’s not working anymore. It’s not me, it’s you.

Plastic Pollution is Tough, so we need to Toughen Up!

Throughout the years, plastic pollution proved to be a tough one to tackle. It’s ravaging our oceans and killing marine wildlife on a colossal scale. Plastics are now diving as deep as Marianas Trench, and as far as Galapagos Islands. To make the fight even tougher, plastic is taking the war at a microscopic level, thus, contaminating the very food chain we dominate. With the plastics’ all-out-war against our environment, it’s time to toughen up and face it head-on!

“Single-use plastics are a scourge on our seas and lethal to our precious environment and wildlife so it is vital we act now.”

According to Gove, plastic pollution is a “worldwide emergency” that needs more actions than words. A lot of nature activists are saying the same thing, and we couldn’t agree more. Banning single-use plastics is just the beginning because we still have a long way go to defeat this common enemy. If the United Kingdom can do it, well so are we!