You already know that plastic is everywhere, right? From the land to the sea and air, even in your food and from the world’s largest gyres to as far as the Galápagos Islands. Plastic trash is really having a trip of its lifetime, a lifetime of 500 thousand years to be exact. But, who would have thought that trash can have record-breaking tours even to the extreme depths of the unknown? In that case, here me out as we talk about the controversy of the newly-discovered trash in Marianas Trench.

For centuries, we’ve been warned about the dangers that might be lurking deep underwater. You might have imagined about evil monsters, giant sea creatures, or man-eating mermaids. But what if I told you that it’s far worse than that?

How deep do we know about the world’s deepest trench?

The ocean is unbelievably vast, 361 million square kilometres to be exact. It makes up 71% of the Earth’s surface, but about 95-98% of it is still waiting to be explored. The Marianas Trench, stretching down at 36,000 feet deep, is hailed to be deepest known part of the Earth. Light can’t penetrate at that depth, so imagine how dark it is down there. Despite being too dark, the trench is not dead, at least for now. It is actually expected to be the purest oceanic zone still in existence. Okeano’s Explorer of NOOA (National Oceanic and Atmospheric Administration), America’s Ship for Ocean Exploration, has found unusually crazy deep-sea species in the trench with unique features that are yet to be studied. Provided that Marianas Trench is almost untouched by human detrimental activities, the waters here should be assumed to be perfectly pristine, right? Well, I have a bad news for you. That is, indeed, just an assumption.

How deep is your deep-sea trash in Marianas Trench?

It turns out that for the world’s trash, there is no place too deep to visit. It’s extremely alarming to know that Marianas Trench is the latest destination of the most rubbish species on the planet, called “trash”. A plastic ice bag was found drifting deep at the trench’s seafloor, earning its title to be the deepest known piece of plastic trash. It was revealed after the experts studied a collection of documentation, called Deep-Sea Debris Database, from the 5,010 dives of the past 30 years. Among the debris classifications, plastic is the most prevalent, particularly single-use plastics. Did you know that 89% of the plastic garbage is single-use plastics like bags, straws, and bottles?

According to the researchers that discovered this deep-sea garbage,

“The influence of land-based human activities has reached the deepest parts of the ocean.” 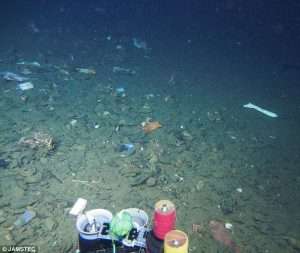 Who are to be blamed for this deepest underwater pollution?

Indeed, the cost of our overconsumption is not something to be bragged about. It is, in fact, really humiliating. Think about it. Three years ago in 2015, we have known to produce 6.3 billion metric tons of plastic wastes. Of all that trash, only 9% was recycled, 12% was incinerated, and a heartbreaking 79% was left discarded. Among the 79% discarded wastes, a great portion reaches the ocean. It’s sad, and embarrassing to know that as of today, most parts of the ocean are more polluted than landfills. We are actually creating giant floating islands of wastes called gyres, and they keep getting bigger and bigger every second. Have you tried checking out the Great Pacific Garbage Patch? I have to warn you that it’s not the prettiest of sites, but the grossest one actually. Because of this giant swirling island of floating trash, the deep sea of Marianas Trench, located adjacent to this patch, is now heavily polluted.

How much deeper can this problem get?

As a matter of fact, a recent study shows that Marianas Trench is even more polluted than the most polluted rivers of China! They theorized that the high level of trash concentration here came from the ocean plastic debris all over the world. Deep-sea dwellers in Marianas Trench, called amphipods, are found positive to high concentration of POPs or Persistent Organic Pollutants. POPs are toxic industrial chemicals that can’t be broken down by nature. These chemicals have been banned in the late 1970s after discovering that it can cause cellular mutations, including cancer. These 2-cm scavengers might have fed upon dead and larger species that once survived in highly polluted oceanic areas. The first 10,000-16,000 feet of the trench is also filled with trash and many creatures are found to be innocently clinging or eating it. These pieces of wastes are like bombs of toxic chemicals that slowly poisons the natural environment.

With trash in Mariana’s Trench, the level of garbage contamination is now turning unlimited. If plastic pollution is an invasion, there’s nowhere else to run. When we continue to contaminate the planet, it will bear contaminated life. If microscopic planktons and amphipods are now eating pollutants, these will ripple up through the food chain, with us being on the top. In the end, the poison we created will poison us in return.