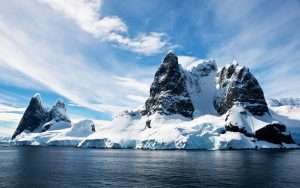 Plastics Pollution Found in the Arctic

Since people can’t survive the harsh freezing environment of the Arctic wilderness, this frozen corner of the Earth is imagined to be “immune” from the human footprint. Unfortunately, that’s no longer the case here, because plastics in the Arctic might be your newest daily dose of bad news. Now without further ado, let’s go down to business.

Don’t be deceived by the glistening frost of the Arctic, because researchers from Germany’s Alfred Wegener Institute, Helmholtz Centre for Polar and Marine Research (AWI), discovered a great impurity frozen in its ice. As it turns out, it’s not as clean as it looks.

The research confirms that the Arctic region is now heavily infiltrated by microplastic contamination. Taking samples from five different locations, scientists discover an average concentration of 12,000 microplastic particles per litre of Arctic sea ice, which is equivalent to 45,000 particles per gallon.

A sea ice physicist of the British Antarctic Survey, Dr. Jeremy Wilkinson, described the research expedition as a “benchmark study”.

“Microplastic particles were found throughout all cores sampled… It suggests that microplastics are now ubiquitous within the surface waters of the world’s ocean. Nowhere is immune.”

The concentration of microplastics is now three times higher than the previous study, where it first estimates a trillion plastic pieces frozen across the Arctic region. But what exactly are the kinds of plastics are we dealing here with?

In order to dissect the severity of microplastic pollution to the Arctic, researchers need to break the ice, both literally and metaphorically. Analyses were done using an infrared spectrometer to identify the plastic “fingerprint” frozen within the core samples.

“Using this approach, we also discovered plastic particles that were only 11 micrometres across. That’s roughly one-sixth the diameter of a human hair… “

­– Gunnar Gerdts, a researcher from the Alfred Wegener Institute.

Seventeen types of different plastics are found frozen in the sea ice samples. Most of it are traces of paint, nylon, polyester, rubber, and cellulose acetate (commonly used for cigarette filters). A large quantity of these are fragments from single-use plastics and discarded fishing nets.

The researchers believe that a huge chunk of these Arctic plastics was drifted from the most polluted gyres of the Earth, which are systems of circular ocean currents, including the infamous Great Pacific Garbage Patch. You might have heard that we have five of these great garbage patches across the world’s oceans, but how will you feel about making it six? Unfortunately, the latest recruit to this floating islands of trash is the growing Arctic garbage patch.

Amidst these findings, we now wonder how this all ends. 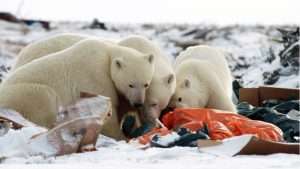 Everything has a melting point, and Arctic ice is no exemption. The question is, what are the possible after-effects when the frozen ocean surface undergoes a meltdown?

Experts predicted the great possibility of melting polar ice caps due to Global Warming and Climate Change. As a matter of fact, almost 50% of the polar ice caps already melted throughout the past decades. When the meltdown reaches the Arctic, its frozen plastics will ravage the oceans, contaminating it even more.

“During our work, we realized that more than half of the microplastic particles trapped in the ice were less than a twentieth of a millimetre wide, which means they could easily be ingested by Arctic microorganisms…”

The microplastics are too tiny that the aquatic animals are mistaking it for food. Common victims include fishes, sea turtles, and even whales, which are giant filter feeders.

But the biggest threat here are the ones with the smallest size – the planktons. Zooplanktons and phytoplanktons dominate the bottom part of the marine food chain. These microscopic creatures are a staple food for most of the aquatic consumers. Following the food chain rule of eating and being eaten, it’s safe to say that when planktons are now contaminated with microplastics, then every single species above them are also eating plastics, including YOU.

The effects of microplastics in humans are still under studies until today. For marine animals, on the other hand, the effects are as bright as a daylight. Countless photos of animals suffering from plastic pollution are well-distributed online. From a mountain of plastics in a dead whale’s gut to a turtle shell’s deformity because of plastic entanglement. Who can forget the viral pictures of dead seabirds revealing extreme plastic ingestion as their bodies decay? Or the fishes dying of starvation after eating microplastics? Even juvenile polar cods are found to be positive for plastic ingestion. If I were to continue, this blog will not be enough to enumerate it all.

The Arctic is already warming twice as fast as the other parts of the world. The discovery of heavy microplastic contamination to its frozen ice, which is even greater compared to other parts of the ocean, is like adding insult to injury.

Now that the plastic pollution is already intoxicating the most pristine and uninhabited parts of the world, we might end up completely destroying the last natural frozen paradise. It’s devastating to think that we might lose everything if we stay in the comforts of our self-made realities.

Remember, The Earth is You, and You are the Earth. So, take care of yourself by taking care of the planet. If you don’t know how and where to start, I will gladly suggest taking the pledge. Be one of us! Because the fight against plastic pollution needs every drop of support, and every ounce of care, from every concern of the people, with every action to take!

0
The Last of the Plastic Straws! It’s Time To Stop The Straw From Sucking The Life Out Of The Planet. Plastic is by far the worst...