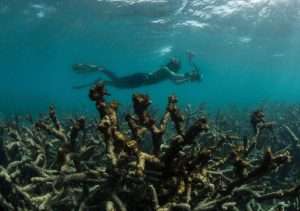 Global warming is as real as corals dying. We already lost 50% of the world’s corals for the last 30 years, and only took us two years to send half of the Great Barrier Reef’s corals to obituaries. By 2050, scientists predict that Global Warming will proceed to a 90% kill across all of the coral species. When that happens, a quarter of all marine wildlife will go extinct.

Now that this terrible truth has been revealed, why don’t we dig deeper into this alarming concern? Let’s start with this question – how much do you know about corals?

Understanding the Science of Corals

Corals are tiny marine Cnidarian species that live in colonies.  Together, coral polyps form coral reef structures and build a skeleton together made up of calcium carbonate. But did you know that corals can’t survive on their own?

Corals can’t feed themselves enough to stay alive. Thus, they depend on a symbiotic relationship with “Zooxanthellae”, an algae which give corals a colourful pigmentation. This photosynthetic single-celled algae live inside the coral polyps and convert sunlight to sustain nourishment to the entire coral colony. That’s why we see a lot of corals in the oceanic areas where sunlight is abundant.

Do you want to know more about corals? Why don’t we talk about the largest coral reef spectacle of all time?

The Great Barrier Reef and Wonders Behind it

The Great Barrier Reef is the Earth’s largest coral reef system and is home to 3,863 individual coral reefs and more than 2,000 marine species. This beauty of natural wonder is a gift bestowed to the Coral Sea off the coast of Queensland, Australia.

Stretching at approximately 2,300 kilometers, the Great Barrier Reef is a “living tapestry” that is definitely not something to be belittled. Amazingly, it’s one of the seven wonders of the natural world and is even larger than the Great Wall of China. This “mosaic of living diversity” is the “planet’s largest living structure” and the only living thing on Earth visible via space satellite.

Unfortunately, how long do you think can this wonder remain wonderful? What will eventually happen if the oceans continue to rise in temperature?

Global warming is an abnormal increase in Earth’s average temperature due to excessive Greenhouse Effect caused by human activities. When the Earth goes beyond the normal temperature scale, many species will not have enough time to adjust. Corals, for example, may get killed in the process.

“…even the most pristine, the most remote, most highly-protected coral reef is vulnerable to global warming.”

When the oceanic temperature goes higher beyond what Zooxanthellae can tolerate, this algae will start to produce reactive oxygen molecules like hydrogen peroxide. When these molecules leak into the polyps, the corals will get rid of the algae as a form of protective reflex. Without the algae, the corals will lose its pigmentation and appear pale white, a process known as “coral bleaching”. As I’ve said earlier, corals can’t feed themselves enough to sustain life. Without Zooxanthellae, the colony will starve to death.

If I were to ask you, how much damage do you think have we caused so far?

After decades of struggling from pollution and over-fishing, coral reefs have never reached an extent of extreme damage before, not until a back-to-back major coral bleaching for two years in a row.

Mark Eakin, a study author and coordinator for the U.S. National Oceanic and Atmospheric Administration’s Coral Reef Watch, confirmed the extent of coral damage to CNN:

“We’ve seen half of the corals on the Great Barrier Reef killed by climate change in just two years.”

If we don’t stop the trend of coral deaths, what will happen next?

Bringing out the Casualties

Even the fastest-growing corals will take more than a decade to fully recover from coral bleaching, given that they will not experience another major hit, which is unlikely to happen by the way unless we stop global warming.

Despite covering less than 1% of the ocean floor, coral reefs are known to support 25% of all marine species. That’s the reason why reefs are called “the rainforest of the sea.”

Now, when the prediction that we will lose 90% of the corals by 2050 became a sad reality, consider all these benefits gone.

If only we can give coral reefs an ample time and slow down the progress of global warming, it’s still possible to reverse the dark prediction. Corals and Zooxanthellae can still possibly acclimatize themselves and eventually evolve to tolerate warmer conditions. But since evolution can’t happen overnight, we need to lay down long-term solutions.

The battle is not yet over. We can still choose to save coral reefs and the lives depending on it.

1
Hawaii Passes a Bill to Ban Coral-Damaging Sunscreens Hawaii to Ban Sunscreen Who would have thought that sunscreens will be lethal for corals? Believe it or...